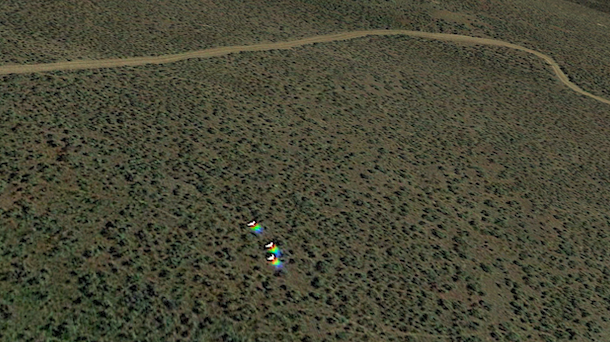 Now this was reported just today by a woman living in Richland. She found three glowing objects moving over the mountain area on Google Earth map. So I had to make a video of it. She had only a screenshot. At first when I look at it, they almost look like birds, but the shape is where the similarity totally ends. You see they are glowing white with a rainbow aura coming out the back end…which is some kind of propulsion. I have seen birds in google earth, but never like this. This is not birds. They may be fighter jets flying in unison, but again, I\’ve never seen this shape of fighter jet before. These really appear to be U̳F̳O̳s. I checked the photos before and after this time in the same area (watch video) and there is nothing, no buildings, no debris, no cars, planes nothing that would indicate it was just a reflection off the ground. These things were flying, they were big and they were moving fast and had something coming out the back. That is 100% a̳l̳i̳e̳n̳ technology. I bet there is an a̳l̳i̳e̳n̳ base nearby about 5-6km below the surface of this very hill they are on.

How Can Aliens Discover Intelligent Life On Earth?